Using Foreknowledge of Data Set Changes to Understand the Effects

In most data studies, the original data set is modified to tease-out certain patterns.
Knowing how certain changes affect metrics may prove a very useful tool when communicating results to clients.

In this example, I will begin with a simple data set illustrating disease diagnoses per age group.
The data set is sort to show lowest rates to largest.
Next to the data set are a series of measures to show central tendency as well as other metrics to illustrate range (Min, Max) and quartiles (“IQR…”).

First, I’ll illustrate the effects of increasing all values by 5.
This change results in all measures increasing by the same value. Note all measures of central tendency are exactly 5 more as well as the ranges and quartiles.
Also, decreasing data set values results in the same effect on measures. 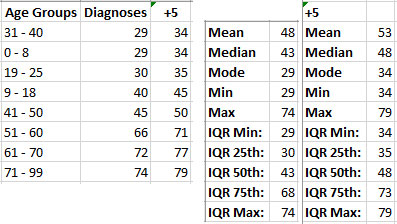 The same effect may be observed when dividing values by a constant value.

Also, multiple values by 5 (constant) affects measures by increasing their values by the same multiplication value.

In this example, instead of changing all values and noting the effect on all measures, I’ll simply add one new value (52) to the data set, above where the original mean (48) is located.
Since I added the new value above the current mean value, the mean was increased.

Next, I’ll perform another change to the data set, but this time below the mean, and I’ll remove an existing value (45).
Notice the mean (48) increased by 1. 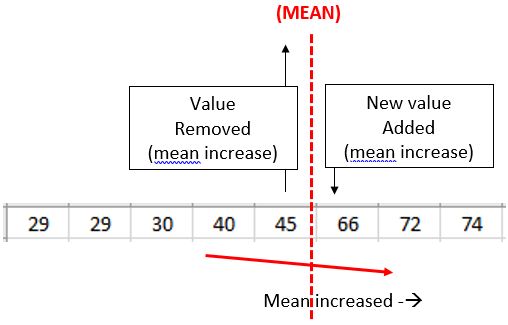 Next, we will look at two ways to decrease the mean – tilt the mean the other way. 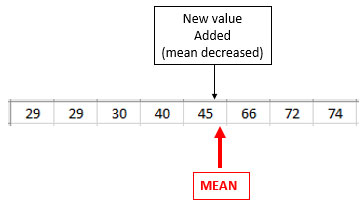 As you can see, there are two ways to decrease the mean – removing a value above the mean and adding one below it. Again, notice how tilting the board (data set) down to the left, causing the center (mean) to slide left. 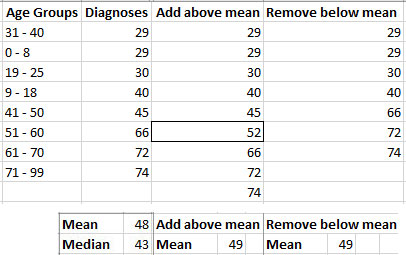