Please see me my other Excel articles.

Descriptive statistics is concerned with describing important aspects of set of measurements, organizing and summarizing data.
Here’s an example of descriptive statistics using the following data set:
There are 20 statistics classes at a university for which all the ages of the students in one class have been collected – a population (“all the ages”).
A descriptive question would ask “What is the most common age in the class?”

When dealing with a range of values, sometimes I it helpful to determine based on its physical placement in relation to all other values, which value resides within the center
While the mean represents the mathematical average of a group’s values, the median is the value which logically lies in the center of an ordered group.

In this article I’ll demonstrate the use of the Median() function to inspect the series of values in the Diagnoses column to determine which value resides within the center.
As you can see, four values reside above and below 45. 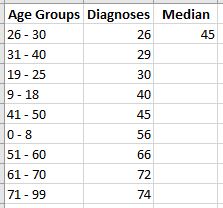