Using Excel to create a script to batch-rename images.

First, I’ll begin with a simple set of images I intend to rename.

Then, I’ll create a new Excel spreadsheet from which I’ll delete the last two worksheets, leaving only one.
In my new spreadsheet, I’ll enter those image names into an Excel spreadsheet (or use one of many utilities that read/copy images names from a directory).

With the list of “old” images, I’ll add a new column to contain a new name for each image.

Now for the magic, I’ll add a new column to the left – this should be the first column.
In each row, I’ll copy/paste “ren” for the DOS command that will renamed each image from the “new” column to its “new” image name.

To convert the spreadsheet to a batch script, I’ll first save the document as a Tab-Delimited text file.
Next, I’ll rename the document so that it has a “.bat” extension which indicates to the Windows operating system it’s a script file.

With my batch-script ready and within the same location as the images to be renamed, I’ll simply double-click the script which causes Windows to batch-rename the images in place. 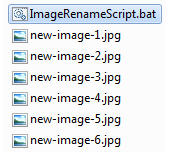