As part of the S.O.L.I.D. design principles, the Dependency Inversion Principle (DIP) provides guidance for ensuring layers within the application avoid unnecessary dependencies from coupling. DIP ensures each layer’s modules remain independent of one another and should depend on abstractions instead of concrete details, increasing usability and flexibility to change.

In the following example, I demonstrate two classes for a workflow system where a process reacts to a team members, starting a workflow which sends a message.

You’ll notice the Workflow class via composition is tightly coupled to the Message class, representing a dependency and possible issue if that class is later change. Also, it increase difficulty when testing the Workflow class. 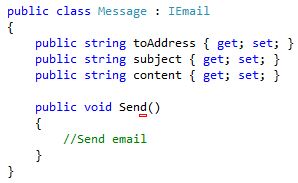 To recap, my example began with a high-level module (Workflow) depending on a lower-level (Message) which limited its testability and flexibility to change.
I abstracted the dependency into an interface which the lower-level inherited, and the higher-level pointed to, removing the dependency.