Often within during the execution phase of a project, tasks occur which are dependent on other tasks being completed before they can begin. This analysis should obviously be realized during the planning phase.

In Microsoft Project, you can instruct the program to ensure tasks with dependencies occur in their respective order by linking those dependencies.
In the example below, I have a project with tasks to acquire a new server.

For the purpose of this article I entered the tasks in their natural order of execution and so each occurs before a task on which its dependent. For example, I must perform research on the server to buy before presenting results to executive who will issue money to complete the purchase.

Next, I will use the link button on the Task tab apply a dependency between each task.

When I apply the dependency, project automatically adjusts the second task’s start date to begin after the first tasks has been completed.

To later inspect the dependency, you may double-click on it to view more information. 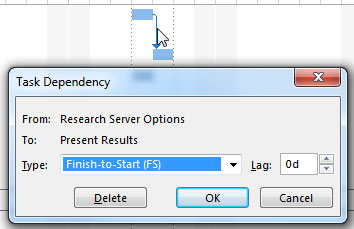 Also, I may double-click tasks to see predecessors.